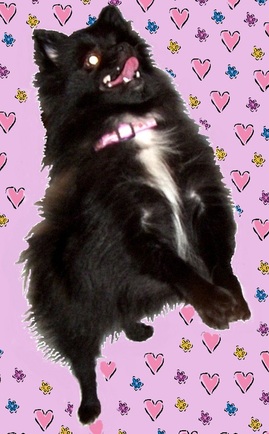 My mom and I started into poms in 2008 with our beloved black girl, Jandala's Jill. We didn't really have intentions on bringing Jilly home, as we had gone with plans on bringing home a puppy - but Jilly looked at us and we looked at her and she climbed straight up her pen to come and see us. That hitched it, and Jilly came home.
After a while we decided to look for a boy to breed Jilly to, but we weren't quite ready to have our own stud yet. We already had one neutered male pom, Maestro, whom we had kept back as a pet, (he wasn't registered and not stud material, but we are life long buddies), so with the help of Janet Deleew of Jandala's Pomeranians, we bred her to Miteycute Avalanche (a.k.a. Breezy) and had our first beautiful litter. Much to all of our surprise, three out of 4 pups were parti colored. And from there, we kept one sable parti (with sable, black and white) girl who became one of our foundation girls - Pom Beach Cinnamon Splash.

In 2011, I married the love of my life, David. Cinnamon had beautiful puppies for us and now she is enjoying her retirement from breeding and is a full time house pet. Our dream all along (first with mom, and now also with David), was that someday we would breed parti colored poms that were competitive enough that we could show them against the orange traditional colored poms. Well, that was easier said than done as they are not easy to find in the size and quality that we wanted. This is a big challenge due to the problems inherent in other coat colors such as long legs, longer backs and noses and less coat. Through a careful breeding program, we hope to put more type and quality into our parti program and breed for a dog with all the qualities that our breed standard is looking for in a top dog.

In August of 2013, we were devastated to say goodbye to Jilly but we were grateful that we were able to keep back Pom Beach Satin Doll, her grand-daughter out of the last litter. Dolly is staying at moms home base and we have had some beautiful puppies from her to carry on both Jilly and Cinnamon's legacy. We now also have another (and the last) daughter out of this cross, a black and white parti girl we call "She Ain't Got Rhythm". Dolly will be retiring completely to the life of moms beloved pet in 2020 and we hope to have one of her or Rhythm's offspring to carry the flag going forward.

After a long search, a little parti stud came available for us. We met Linda Henry of Meadowlark Pomeranians and she sold us Meadowlark A Lil Jazz Exercise.  Jazz "adopted" Dave, and so became his first official dog that he could call his own. Jazz also amazed us with his sweet nature and the fact that he hardly ever barks. Jazz taught us a great deal about parti colors and their breeding. For example, we found out that many parti dogs take much longer to mature and get their coats in than the traditional solid colored dogs!  Jazz brought wonderful heads into our program and his pups have always been very strong boned and have loads of talent for agility both with their athleticism and intelligence.  After siring many beautiful puppies for us, we have retired Jazz from breeding in 2018 and he is hoping to start a new career in agility.

Currently we are in the process of adding more type and substance, coat back into our parti lines (which involves breeding back to the traditional colors). This is a multi-generational process that has a lot of thought and planning going into it to get those qualities and then breed back to add the color back in. We have already seen an improvement and have just added a new parti stud to our program who we have high hopes for in 2020.