But I Want A Teacup Pomeranian.... 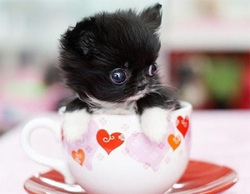 Isn't a 4-7lb dog small enough for you? Wouldn't you get enough attention from having a gorgeous, 4-7lb, full coated Pomeranian who is healthy and outgoing? Pomeranians come in SO MANY COLORS, couldn't you find one that is unique and unusual, with something other than it's size to set it apart?

There is no such thing as a teacup Pomeranian. Poms are a TOY SIZED BREED and should weigh between 4-7lbs according to the AKC breed standard. Some breeders breed 10-15lb Poms in order to get large litters, this too is unethical.


It is unsafe, unethical and greedy to breed specifically for Pomeranians that will be smaller than the breed standard.

*It's unethical because more than half of all puppies that will be "teacup" sized as adults die within their first 10 weeks of life due to health complications, hypoglycemia or defects that resulted from breeding generations of "runts" in order to get such small puppies.

*Teacup puppies rarely exhibit the typical "Pom" personality or "look". They are often small, but poor examples of type and quality because they have been bred out of the smallest dogs possible, not out of quality Poms. They can be scared, timid and unsure of themselves because they are so extremely fragile. They just look "sickly".

*It is greedy because instead of breeding for healthy, well tempered puppies, breeders breeding for "teacups" put profit ahead of the well being of their breeding stock and puppies.

Pom puppies within the standard are already TINY and FRAGILE, they don't need to be any smaller, they are adorable and perfect just as they are.

Please do not contact us if you are looking for a puppy that will be under 4lbs as an adult.

Typically we breed 4-7.5lbs females to 3.5-4.5lb males to keep size within standard of for our puppies and to ensure that our females are a healthy breeding size.

Occasionally a healthy puppy from two standard sized parents will be born and will end up being smaller than the standard. These accidental teacup sized puppies are sold on spay/neuter contracts and are placed into specially screened pet homes.

Also, occasionally a puppy will be bigger than their parents or the breed standard, this is because there are "throwbacks" in the Pom line. Poms were once 30-40lbs and although they have been bred down over the years, occasionally a Puppy will get a gene that will make it larger than standard (usually anywhere from 10-18lbs).

Re-printed with permission from Parker's Precious Poms.
We totally stand by this and have the same breeding practice in this regard.